For LGBT+ History Month Janan Nuri reviews ‘Curing Queers’, a book on gay aversion therapy in the UK which has an important message for nurses today. 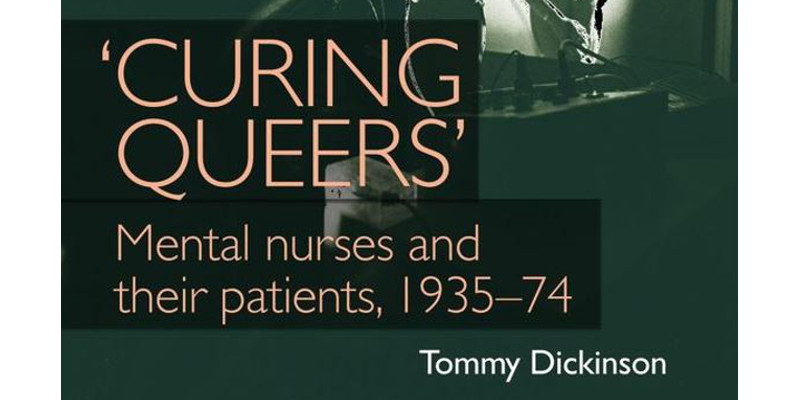 Dr Tommy Dickinson is a Senior Lecturer in Mental Health, and a Registered Nurse. In 2015 he published a book entitled ‘Curing Queers’, which looked into the aversion therapies undertaken on homosexuals during 1935-1974 in the UK. As well as being an important book for medical and LGBT+ history, there is a strong message for nurses today.

Dickinson’s book provides a fantastic insight into the early gay movement in Britain following the Second World War, explaining in depth the sociological factors during this time, with individual cases to help illustrate this. In short, before the war, there existed homosexual acts, but not homosexuality as an identity.

Homosexuals were seen as a threat to the traditional ideal of married heterosexuals with children, and some doctors and medical professionals decided to try and do something about these “sexual deviants”, these “queers”.

There were a few different kinds of treatment which were explored in trying to cure homosexuality. This therapy worked on the idea of conditioning behaviour, as exhibited by Pavlov’s study with his dogs. Some doctors during this time believed that people could be conditioned to change their sexual preference.


One form of treatment involved electroshock.

“I remember sitting in the room on a wooden chair ‘dressed’ [wearing women’s clothes], but I had to be barefoot as my feet had to touch the metal electric grid. My penis was also wired up to something to measure if I got an erection – I felt totally violated. … I remember the excruciating pain of the initial shock; nothing could have prepared me for it. Tears began running down my face and the nurse said ‘What are you crying for? We have only just started!’”

Not all nurses agreed with this therapy, and instead found it distressing to see.

“I remember the first time I witnessed it [electrical aversion therapy]. I thought it was barbaric, I remember thinking ‘where was the treatment?’ The young lad nearly jumped out of his skin with the jolt of the first shock. Then you could see it was almost mental torture waiting for the next one!”

Another form of treatment was chemical.

A patient would be injected with apomorphine, an emetic which produced nausea and vomiting. There would be no bucket or toilet in the room, nothing but a bed. During this treatment the patient would be shown images of naked men, whilst there was a recording playing of the doctor telling the patient how disgusting they were, that their desires were perverted, "look at the mess you're in". The patient would not be allowed to leave the room, here is one patient’s experience:

“All I wanted was to wash my mouth out with fresh water, but I wasn’t even allowed that. … I was not allowed out for three days. I went to the toilet in the bed; I had no basin, no toilet facilities – nothing. I had to lie in my own faeces, urine and vomit. … I thought I was going to die.”

After a few days of this, the patient would be cleaned up, as well as the room. The patient would then be shown photos of naked women, without receiving any nasty chemicals to make them unwell.
Oscar Mangle recalls:

“What was going through my mind was not that I was scared of being gay. I was petrified I would not come out of this mental hospital alive.”

Dickinson explores the reactions of nurses during these treatments, and focuses on the idea at that time that doctors were seen as the ‘experts’ in practice. Doctors were believed to have the best interests of the patients at the heart of all treatment, no matter how barbaric that treatment was. A nurse during this time was not expected to ask questions, but rather to get on with it, to be subordinate. This of course is very different today, where nurses are taught to question practice.


Nurses, and those in the nursing family, should not be afraid to question doctors and medical decisions in practice today. By learning from the past, we can ensure we don’t make the same mistakes again.


RCN members can borrow a copy of 'Curing Queers' from the library here, or you can access an electronic copy by clicking here.

If you have any questions about borrowing or accessing eBooks, please contact the library: rcn.library@rcn.org.uk

If you are interested in Tommy Dickinson’s work then you can see an interview with him here.

There is also an interesting talk by Peter Tatchell on a Nazi doctor who performed research on “cures” for homosexuals. You can watch a recording of that RCN event here.