The nurses have spoken

The nurses have spoken 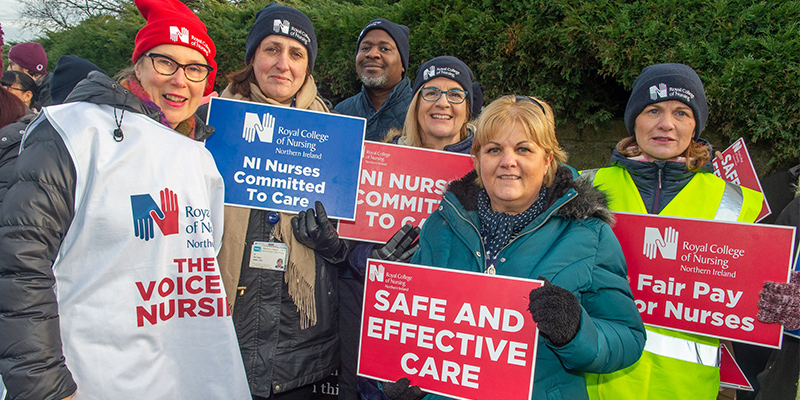 My Year of the Nurse and Midwife started with a bang. A brilliant visit to Northern Ireland joining our nurses on the picket lines at four hospitals; The Mater, City, Royal Victoria and Antrim Trust in support of pay parity and safe staffing. What a fantastic experience it was too. To feel the support and solidarity of colleagues literally linking together in a human chain, and the spirit of determined defiance was truly inspiring and uplifting.

Members told me “enough is enough”. They were at the cliff edge, no longer prepared to see quality compromised in the job they love and want to do. They said things had become desperate for nurses to resort to industrial action, but they were doing so to protect patient safety, their pride and professionalism, and the health and care system for the future.

I was very struck by the intergenerational aspects of nurses’ concerns; older nurses saying they were doing this to protect young nurses coming through the system, to ensure they had the conditions to enable them to flourish and stay in Northern Ireland.

The sense of outrage that nurses had not been listened to before, disrespected and undervalued was no longer being tolerated. Most encouraging of all was that nurses were not acting alone but had the full weight of public support behind them. That has been one of the most empowering aspects of the dispute; expressed in a myriad of ways from tooting horns, to patients and their loved ones telling nurses they had to get out there on the picket lines, to the local community bringing pizza and refreshments; These are important markers of public support. I also had the privilege to meet Directors of Nursing, CEOs and colleagues from HR in one Trust.

Behind the picket line, lies a complex choreography of teamwork and communications, late nights and early starts. Colleagues from different parts of the RCN have been deployed to add strength and reinforcement to the NI office, support the discussions and negotiating positions and manage the communications, most skilfully handled by Pat Cullen and Rita Devlin across a range of media outlets. It has been a masterclass in teamwork, member mobilisation and organising with the public to achieve a common goal and purpose. It demonstrates what we can do when we speak with one voice. The nurses of Northern Ireland have spoken and, as one nurse on the picket line said, “things will never be the same again”.

They won’t and nor should they be, because nurses have felt the power in their voice; how it can unlock change and shine a light for politicians to see the way.

As we celebrate the bi-centenary of Nightingale’s birth, let nurses across the world feel and hear the power of their voice being heard; helping politicians to make the right investment decisions in health, education and care and working with the public to further their health and well-being.

The nurses of Northern Ireland have spoken. They have shone a light to help us and the world of nursing see the way.

On 16 January, further strike action was suspended after the RCN Northern Ireland Board considered details of an offer to restore pay parity and address nurse shortages. We’ll now consult members in Northern Ireland on that offer.