Up Close and Personal with 20 Cavendish Square

Up Close and Personal with 20 Cavendish Square

The RCN’s headquarters has recently had a facelift of sorts during a vital restoration project on the exterior of the building. Janan Nuri tells us more… 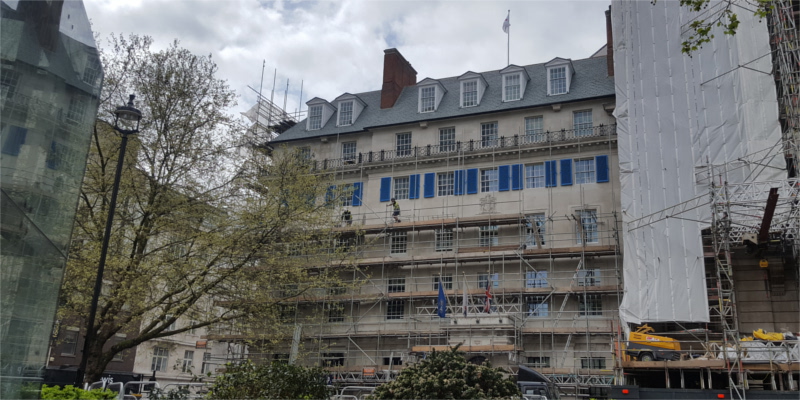 As the external works on 20 Cavendish Square begin to wind down, a few of us in the library were very lucky to get a tour of the exterior of the building, around the scaffolding. We offer tours of London HQ as part of the RCN Library and Archive Service, so getting to see some of the external architectural features close up was a real treat for us guides.

For our tour, we donned high-vis jackets, hard hats (safety first!) and then proceeded to climb up six storeys of scaffolding. The first thing we saw was the roof, with fresh Westmorland slate in place. As our building has a Grade II listed status, we have to make sure we restore everything as close to original as we can. Westmorland slate was used originally and so the replacement tiles are of the same material.

We next went down a level to see the distinctive blue shutters of our building, adorning the top windows. Any changes to the building have to be agreed with Historic England, and we were told how there was a delay of a few weeks during a debate over whether we could replace the hinges on the shutters, and which type were allowed, to ensure they were as close to the original as possible!

After the Second World War, during some building work on our HQ the shutters were painted a slightly greener shade of blue. You can still see the paint marks on the stone where the workmen at that time didn’t wait for the paint to dry. Cleaning the paint off today would damage the stone, so the different coloured marks have been left there, behind the shutters.

Other features on our building include lions (which symbolise prestige, courage, and nobility), lanterns which hark back to the Lady of the Lamp Florence Nightingale, bandaged hands which again symbolise nursing, as well as pine cones which are symbolic of learning (when the College was founded there were many lessons held here on everything that a nurse needed in her career, from anatomy to leadership).

Definitely my favourite part of our tour was getting a chance to see the coat of arms on the front of our building, that of the Cowdray family. I wrote a post previously about Lady Cowdray, the Fairy Godmother of Nursing, and her connection to the RCN.

Lady Cowdray purchased the buildings on Cavendish Square and Henrietta Place that now form the RCN HQ. Architect Edwin Cooper was commissioned to integrate these buildings behind a neo-Georgian façade, completed in 1934. So it is this façade that we were seeing up close.

Lord Cowdray (a highly organised engineer, hard-working philanthropist, and very much in love with his wife) is said to have “sat for hours with the architect, Sir Edwin Cooper, going through designs and entering into the smallest details.” It’s not surprising that the Cowdrays decided to leave their mark on the building.

Seeing all these small details up close was fascinating, and really gave us an appreciation for the restoration works on our building. We are lucky to be here in the heart of medical London, and proud of our HQ’s history. Find out more for yourself by booking a tour here.