Poll shows the public recognises the dangerous shortfall of nurses and wants investment in the future nursing workforce. 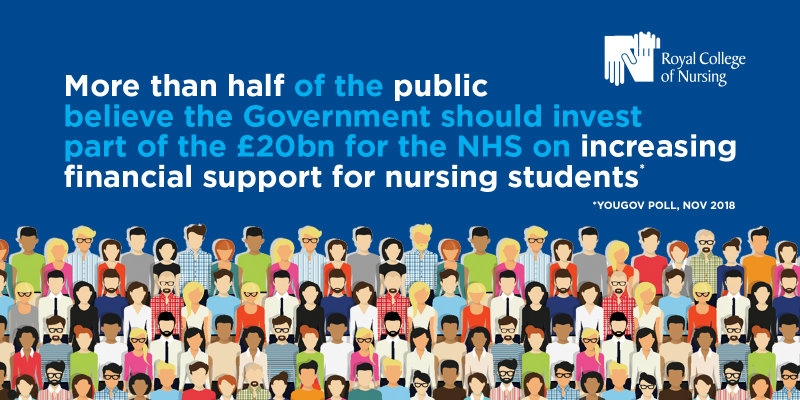 More than half of people surveyed in England agreed the Government should increase funding for nurse education to help stop the decline in student nurse numbers.

The YouGov poll also reveals that nearly three out of four people across the UK (71%) say there are not enough nurses to keep NHS patients safe.

Nurse vacancies in England are projected to rise as high as 48,000 over the next five years if no action is taken, and the RCN believes a key way to tackle this is to increase the number of student nurses.

Since the living support bursary for nursing students was scrapped in England in 2016, applications to study nursing have fallen 33%, while the number of students accepted onto courses has dropped 8%. This is despite government promises that the policy would increase the number of people undertaking a nursing degree.

Adaeze Bowen, a second-year nursing student from Essex, said: “Nurses, both student and qualified, deal with stressful, challenging situations on a daily basis. We have to confront death, aggression, emotional distress and long, physically demanding work hours – and then go home and look after our children, pay our bills and keep a roof over our heads.

“Even though I was in the last cohort to receive the bursary, I have struggled financially throughout my studies. I’m a single mum and trying to live on less than £800 per month is incredibly challenging. That constant financial stress compromises the quality of your work and the time you spend with your family.

“Things are even worse since the bursary was scrapped. Not only have student nurse numbers visibly dwindled, the drop in morale and motivation on the wards has also been evident.”

In response to the falling student numbers, the RCN has presented costed proposals to the Government such as a maintenance grant for all nursing students and practical support for tuition fees, including bringing back the bursary or introducing forgivable loans. In this second option, loans would be paid back by the Government in return for nursing service.

As the polling makes clear, the public backs increased spending on financial support for student nurses. The RCN believes this support is vital to encourage more people to study nursing and ultimately address the worsening staff vacancies crippling patient care in England.

Acting RCN Chief Executive Dame Donna Kinnair, said: “Taxpayers have spoken on how their money should be spent – politicians and NHS leaders would be ill-advised to ignore more than half their voters and patients.

“The number of unfilled nurse jobs is rising as the number in education falls and, without enough staff, the best laid plans will fail. Investing in the future of nursing is an investment in safe patient care and the future of our NHS.”