Discover the story of Evelyn Florence Sewell, VAD during the First World War. 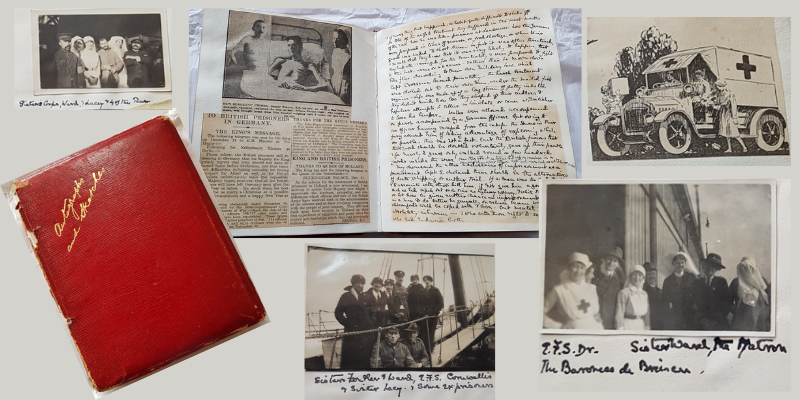 Through our collections you can discover the rich stories of nurses at different points in time. A great example are the items we have that belonged to Evelyn Florence Sewell, who was a Voluntary Aid Detachment (VAD) during the First World War. Sewell compiled a scrapbook and diary during her time working at the British Prisoner of War Clearing Hospital in Rotterdam, Holland.

What is great about the scrapbook is that it captures moments in time, describing hospital life through the stories told by soldiers. The album includes several photographs of the hospital, nursing staff, doctors and patients. As well as this are the autographs of the soldiers often listing the various prisoner of war camps they had been in since 1914.

Sewell writes “There was a wonderful dearth of everything that had been thought essential in England … All kinds of prisoners from Italy and France and many had been prisoners from 1914. Hundreds of men passed through the surgery and then put to bed, washed, fed, dressed, or as soon as possible put on board the hospital ship” ready to transport the men to England.

Sadly, the diary ends abruptly in mid-January 1920. We know from looking at other records that she was described as being a “good intelligent worker”. She had been working as a VAD since 1914 and was mentioned in despatches in November 1917. We believe that she continued as a nurse, never married and retired to Poole in Dorset, where she died in 1972.

We’re currently cataloguing the scrapbook, but you can see a preview over on our Instagram page here.