Nurses tell MPs why they want a People's Vote

Nurses tell MPs why they want a People's Vote

RCN members meet MPs and Peers to explain why they back a second referendum on the final terms of the Brexit deal. 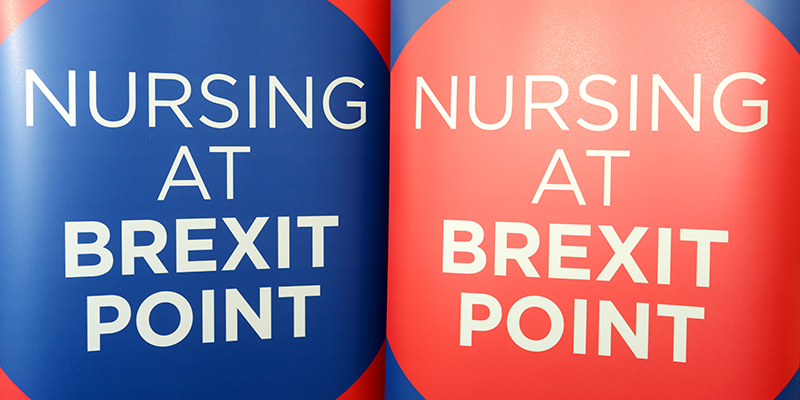 Today a group of RCN members from across the UK met MPs and Peers to share their experiences of working in the NHS since the Brexit vote. They highlighted their concerns on how Brexit is affecting the nursing workforce and its impact on the future supply of medicines, public health and nursing regulation.

Theatre nurse Anna Green works in Portsmouth and is originally from Poland. She said: “We are struggling to recruit enough health care staff as it is so losing a significant number of EU nurses will have an impact on the quality of care. The uncertainty around Brexit is very unsettling for family life and planning for the future."

Earlier this year, members debated the implications of Brexit at RCN Congress and voted to campaign for a referendum on the final Brexit deal.

The parliamentary drop-in event, called Nursing at Brexit Point, followed five days of debate in the House of Commons on the EU Withdrawal Agreement and the Future Framework for relations negotiated by the Government with the European Union.

Dame Donna Kinnair, Acting RCN Chief Executive, said: “Amid the chaos of the last few days in Parliament, nursing staff have delivered a strong message to MPs on how Brexit will affect them and most importantly the safety of the patients they care for.”

Following the Brexit referendum in 2016, the RCN highlighted five key priorities to the UK Government to ensure that Brexit wouldn’t harm nursing and health care services. These included:

In October, the RCN said there had been “little or no progress” on all five of the areas. It is warning that Brexit poses an immediate risk to the provision of safe and effective health care, as well as collective efforts to improve public health.

Donna added: “Uncertainty over the UK’s future relationship with the EU is putting health care in jeopardy. The final Brexit deal will affect generations now and in the future.

“Citizens and nursing staff must have the opportunity to make an informed choice. The solution is a People’s Vote on the Brexit deal."