Nursing staff hand Fair Pay for Nursing petition to Downing Street as RCN launches ballot to gauge members’ opinions on next steps in the fight for fair pay. 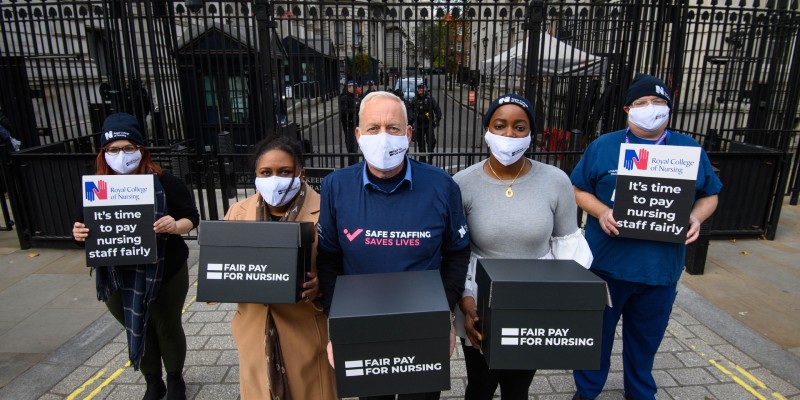 We’re asking RCN members in England and Wales whether they're willing to take industrial action in an indicative ballot that opens today (4 November) until 30 November.

This morning, members visited Downing Street to deliver a petition containing more than 160,000 signatures calling on the government to deliver Fair Pay for Nursing. The petition signals public backing for the continued fight for fair pay, the next steps of which will be determined by the results of the indicative ballot.

The result of the indicative ballot will not formally authorise industrial action but will be used to inform next steps in our fight for fair pay. If it is clear that enough members would take some form of industrial action, then a further ballot may be organised to take this forward.

The ballot will be run by Civica Election Services. Eligible members will receive their ballot email from RCN@cesvotes.com. To make sure the ballot reaches the right people, members’ details must be correct in MyRCN. Check your details now. If you have multiple employers or workplaces, let us know.

The indicative ballot on industrial action has been launched after the vast majority of RCN members who voted in our consultation said the 3% NHS pay award announced by ministers in July is unacceptable.

Graham Revie, Chair of the RCN Trade Union Committee, said: “Today our members are sending a very clear message that nursing staff as well as members of the public say the pay given to nurses is no longer acceptable.

“Those behind the doors of Downing Street cannot say they have not got the message. They can fix this now and deliver the pay nurses deserve. We have all heard fine words, but what we need now is action.”

RCN General Secretary & Chief Executive Pat Cullen said: “At a time when many experienced nurses are burnt out, exhausted and considering leaving the career they love, the link between low pay, staff shortages and patient safety becomes even more stark.

“If ministers are serious about building back health and care services, they can start to show it by delivering a proper pay rise for nursing staff. Our members know it and the public know it. Now it is time for those in Westminster to do the same.”

You can access FAQs about the ballot in England and the ballot in Wales and find out more about how industrial action is initiated, organised and safely carried out by reading our Industrial Action Handbook.

In Northern Ireland, we are still waiting for a formal pay announcement for health and social care staff.