RCN members left with no other choice in dispute over pay parity and safe staffing. 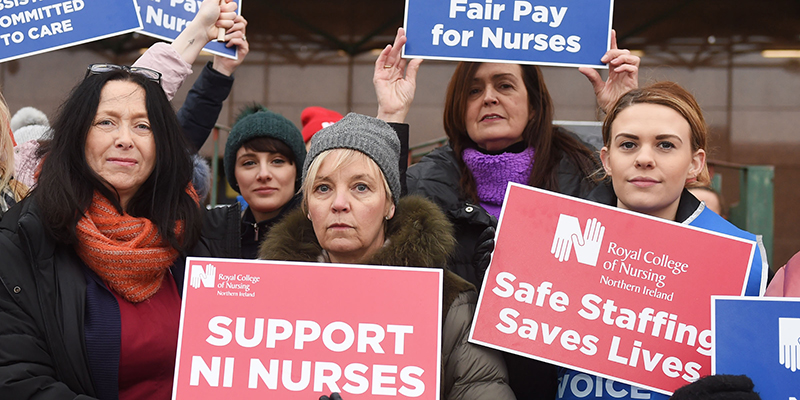 The RCN in Northern Ireland today begins a second day of strike action to demand urgent measures to address unsafe staffing levels and deliver pay parity with colleagues from across the UK.

In the HSC there are almost 2,800 vacant nursing posts and nurse pay has fallen by 15% in real terms in recent years. Nurses in Northern Ireland are the lowest paid in the UK.

Pat Cullen, Director of the RCN in Northern Ireland, said: “For the second time in a matter of weeks we find ourselves in a position where our members have been left with no choice but to take strike action.

“The Department of Health and employers have known about these dates since November. When 92% of RCN members who responded to our ballot said they would take strike action to protect patients, it should have led health service leaders into finding a solution, but it hasn’t. This is very disappointing.

“We could not have been clearer about our demands for safe staffing and restoring pay parity and we have been talking to the Department of Health for months about these issues.

“We have written to several people at the Department of Health over the course of last year outlining our concerns about safe staffing and asking for a formal process to begin to address these serious concerns. It is therefore surprising that the Department of Health issued a statement on Monday stating that dialogue could now begin – we have been asking for this for a long time.

“There are nearly 2,800 nursing posts unfilled in Northern Ireland. This means that for every eight nurses working here, one is missing. This situation has been made worse by the fact that since 2014 nurses in Northern Ireland have been paid less than in England, Scotland and Wales, making it even more difficult to recruit new nursing staff and retain the nurses we already have.

“Last week we had over 400 people waiting in our emergency departments, some for over 48 hours. In one of our main hospitals, 96 patients were waiting on trolleys and critically ill patients, with the most serious illnesses, were not being able to access intensive care units.

“These are the very reasons why action needs to be taken urgently and why we simply cannot afford to keep waiting. In response to this, our emergency departments have been exempted from strike action alongside intensive care units.

“Today, our members in Northern Ireland are making clear to those in power that they and their patients will not be ignored. We all wish to see a rapid solution to this crisis. However, this will not be secured by trying to blame nurses for the consequences of the decisions made by those in power.”