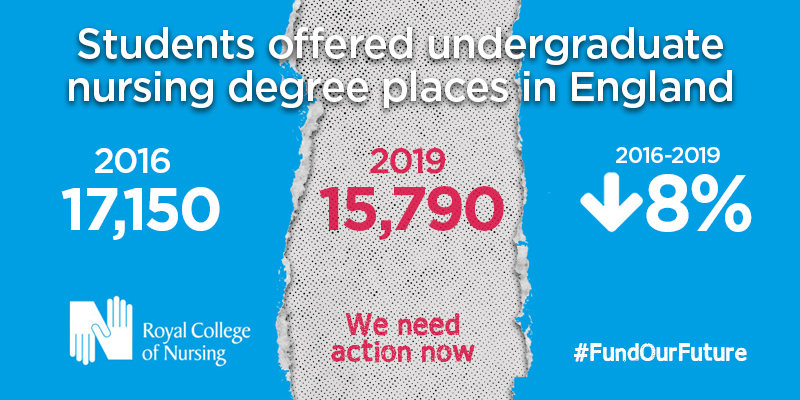 The latest figures from the Universities and Colleges Admissions Service (UCAS) show England is far behind in recruiting the number of new nurses required to care for the increasing needs of patients.

Even with the increase of 4% on last year, this is still down by 8% on the numbers since 2016, the year in which the nursing bursary in England was removed.

Overall this year 1,360 fewer people have been accepted onto undergraduate nursing degree courses in England than in 2016.

Ministers claimed the reform of student funding would boost student places and increase the number of nursing students in England. Yet the latest figures show this has failed to work leaving nearly 40,000 nursing vacancies in the NHS in England alone.

To begin to address the nursing workforce crisis, the Government needs to commit to significant investment to incentivise people to study nursing and support them while they do so.

The RCN’s Fund our Future campaign calls on the Government to invest at least £1bn a year into nursing higher education in England, and to underpin this with workforce planning to meet future population health needs.

Dame Donna Kinnair, RCN Chief Executive & General Secretary, said: “It is encouraging to see our future nurses being accepted onto courses and we look forward to welcoming them to the nursing workforce.

“The efforts of NHS England to attract more people into nursing is a positive step but today’s figures show that there will still be fewer nurses than we need entering our understaffed health and care system on completion of their courses.

“If we are to boost the numbers needed to give patients the care they deserve we need to see decisive action through proper and sustained investment in our nurses of the future.”

In Scotland, the number of students accepted on to nursing degree courses has risen by 8% since last year, which coincides with the country’s bursary being increased to just over £8,000. The bursary in Scotland is due to increase again in 2020, ultimately reaching £10,000 per year.