We’ll now consult members on the offer for pay parity and safe staffing. 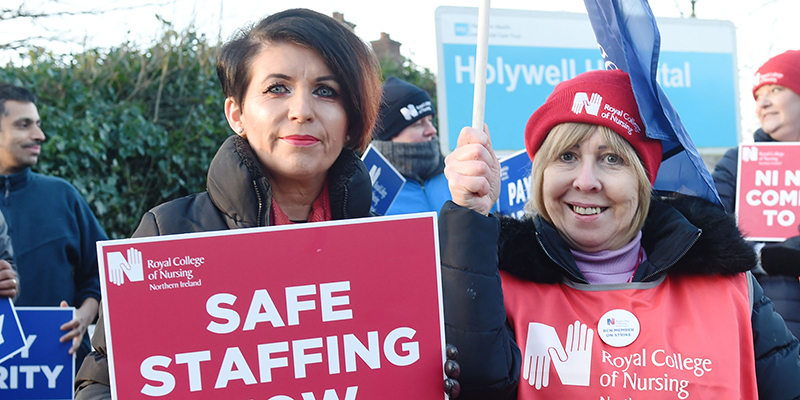 The RCN has announced the suspension of strike action in Northern Ireland.

In line with the governance arrangements of the RCN, the Northern Ireland Board has recommended that strike action is suspended pending consultation with RCN members in Northern Ireland. The detailed framework document received from the Minister will be put before the RCN UK Council on Friday 17 January for discussion and consideration.

Pat Cullen, Director of the RCN in Northern Ireland, has advised the five health and social care trusts that strike action planned for next week will no longer take place.

She said: “This has been a long and difficult road for nurses in Northern Ireland but following the unprecedented decision to take strike action, our members finally have something concrete to consider in relation to both the restoration of pay parity and safe staffing. The progress this week is testament to having political leadership in place following three years of standing still.

“On behalf of our members, we would like to thank Health Minister Robin Swann MLA for taking seriously the concerns of nursing staff and for having the willingness to listen and take meaningful action in a short space of time. We know this action was also backed by our First and Deputy First Ministers.

“We firmly believe this movement towards a better and more sustainable health and social care service is because the voice of nursing not just spoke up but was heard.

“I am immensely proud of the steadfastness and determination that nurses have shown in order to improve conditions not just for nurses, but for patients who have been subjected to longer waiting lists and delayed care for long enough. This dispute always focused not just on pay, but on ensuring that we have the right numbers of nurses in the right places, to provide the care and treatment required.

“Our next step will be to consult our members in Northern Ireland in relation to the offer on pay parity and safe staffing.”

Fiona Devlin, Chair of the RCN Northern Ireland Board (pictured above, left), added: “As members of the Royal College of Nursing, we have been acutely aware of the issues facing the health service in Northern Ireland. Our members have demonstrated the true values of what it means to be a nurse – putting patients first and advocating on their behalf. Throughout this time, we have stood together to do what is best for the people of Northern Ireland.

“As we said many times, no member of nursing staff ever wanted to be standing on a picket line. It was the first time that members of the Royal College of Nursing took this action and I truly hope we are never forced into this position again.”

Dame Donna Kinnair, RCN Chief Executive & General Secretary, said: “Nurses never entered into this lightly, but their hard work and difficult decisions secured real progress. They will feel immense pride at what they’ve secured for their patients and fellow professionals.

“Nurses should never have been backed into that corner and there are lessons for governments, politicians and employers everywhere that nurses will increasingly take a tough stand for what’s right and, when they do, the public are in full support.”