Our members have stated that 3% is not enough so we are asking for further pay negotiations. 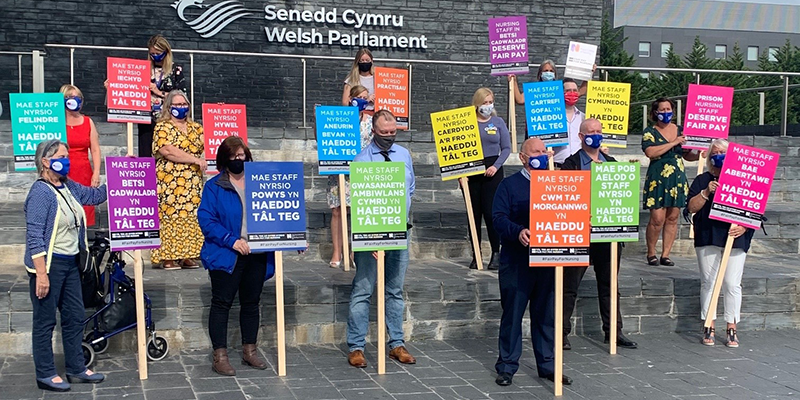 RCN Wales has lodged a formal trade dispute with the Welsh government over its 3% pay award for NHS Wales nursing staff. A trade dispute is a dispute between an employer (or government minister) and workers in connection with their terms and conditions.

The RCN has lodged the trade dispute following the Welsh government’s decision to implement the single-year NHS pay offer for 2021-22 for NHS staff on Agenda for Change terms and conditions without engaging in further discussions.

RCN Wales Director Helen Whyley said: “Safe and effective care for patients must be a priority for the Welsh government. Despite the First Minister announcing £991m of extra funding available for health care this year, none of it has been earmarked for nurses’ pay.

“Patients are waiting for treatment and care and nursing staff are needed to deliver that. There are over 1,700 vacancies for registered nurses in NHS Wales and the Welsh government needs to address this.

“Moreover, the opening of a formal trade dispute warns the Welsh government that if it will not open pay negotiations to increase the percentage of the pay award, RCN Wales will begin proceedings for an indicative ballot of its membership on industrial action.

“For the past 18 months nursing staff have gone above and beyond in their response to the COVID-19 pandemic but now they feel undervalued, disenfranchised and angry. That’s why 94% voted that a 3% pay rise is totally unacceptable."

RCN Wales Board Chair Richard Jones MBE added: "We do not wish to take steps towards industrial action, but the anger and frustration of our members is clear. Nursing staff deserve a fair pay rise, and the Welsh government must strive to meet this very reasonable ask, refusing to negotiate is not in anyone's interest.”

The 3% pay rise proposed by the Welsh government does not align with rising inflation and living costs in Wales and the RCN believes it is nothing short of an insult to the 12.5% that our Welsh members called for.

What's happening in the rest of the UK?

RCN members in Scotland are currently voting on what industrial action they’d be willing to take in support of their ongoing pay trade dispute with the Scottish government and NHS employers.

In England, members working for the NHS will soon be asked to vote in an indicative ballot on industrial action over pay.

In Northern Ireland, a formal pay announcement for HSC staff is still awaited.

All RCN members should check their membership details with the RCN to make sure their contact details are up to date. This includes workplace, employer and preferred email address and phone number. Visit MyRCN to update your details now.