Messages about safe staffing levels beamed onto prolific buildings around Cardiff including the Senedd, Principality Stadium and University Hospital of Wales 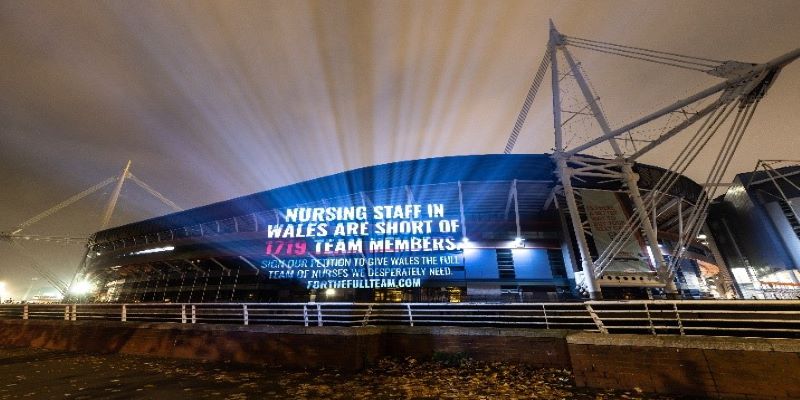 The latest campaign by the Royal College of Nursing Wales kickstarted last night by projecting a direct message to the Welsh Government on iconic buildings across Cardiff. We saw illuminations across the Senedd, Principality Stadium, Cardiff Central Station and University Hospital of Wales, and two other buildings in the capital, to expose the harsh reality of nursing staff shortages in the NHS.

The message read: “Nursing staff in Wales are short of 1,719* team members. It’s time to give Wales the full team of nurses we desperately need.” Staff shortages in Wales mean that nurses need to work 34,284 hours of overtime every week to care for patients.

Recently, with the great campaigning work at RCN Wales, we managed to get section 25B of the safe staffing levels act extended to paediatric inpatients. This specific section of the law relays how to calculate the appropriate nursing level on medical and surgical inpatient wards in hospitals. Now, the #ForTheFullTeam campaign calling on the Welsh Government to extend Section 25B to cover to community and mental health nursing.

Not only does this campaign target Welsh Government, but also the public. The campaign is urging the public to sign a petition demanding the extension of the legislation. The petition needs to reach 10,000 signatures before it will be considered for a debate in the Senedd.

To raise awareness to the public, RCN Wales have also produced a minute-long online video, explaining the necessity of a full team of nurses each with their own role to play through the analogy of a rugby team. This video features the voice of rugby legend Eddie Butler – launching during the Autumn Internationals to highlight the importance of having a full team on the rugby pitch. This video was created with the input of nurses to make it authentic and representative.

Richard Jones MBE, Chair of the RCN Wales Board said “Every day, nurses work tirelessly to take care of people, but we need to start taking better care of them.
“Research has shown that poor nurse staffing levels can increase mortality by up to 26 per cent – and there are 1,719 nursing staff vacancies in Wales. This means there aren’t enough nurses to provide the most safe and effective care for patients. Without a full team, lives may be put at risk.”

One nurse who is backing the campaign is George, 22, who works in intensive care.  He said: “I started working on intensive care in November 2020 during the second wave of the pandemic. We were short staffed then but got through it together.   Going through the trauma of losing so many patients and working so hard brought us close together and I made close friends with a lot of the team.

“But this year almost all of those colleagues have left due to the stress of staffing levels. I work with agency staff and new starters that I don’t know. It is damaging for morale not to have a support network at work.”

George added: “I am supporting this campaign because I want the government to hear first-hand from staff on the front line what is really happening.”

To sign the petition or to find out more about the campaign, visit www.forthefullteam.com Talk to your friends and family about the necessity of safe staffing and follow #ForTheFullTeam on our social media to spread the word.