Hilda Hand nursed throughout the war, becoming a Sister with the Queen Alexandra's Imperial Military Nursing Reserve (QAIMNSR). She had already fifteen years of nursing practice both in the UK and in India. Her first military posting was to the No. 8 General Hospital, Rouen, France, in 1917. Through her photo album and notebook of letters we can build a picture of both her nursing experiences and personal relationships. Hand’s album is a rare resource. Although photography was becoming increasingly widespread, a female photographer with her own camera would have been uncommon.

Hilda Beatrice Hand was born on 16 November 1876 in Acton, Middlesex. Educated at a private school in Ealing, Hand completed her nurses' training at St Olaves' Infirmary from November 1897 until July 1901. Hand worked as a Sister in the Park Fever Hospital between July 1901 and June 1903 and then in private nursing from August 1903 until July 1906. During this time she trained to become a midwife. After passing her Central Midwifes’ Board (CMB) examination she went on to work as a midwife at the General Lying-in Hospital from November 1906 until February 1907. This was one of the first general (non-denominational) maternity hospitals in Great Britain. 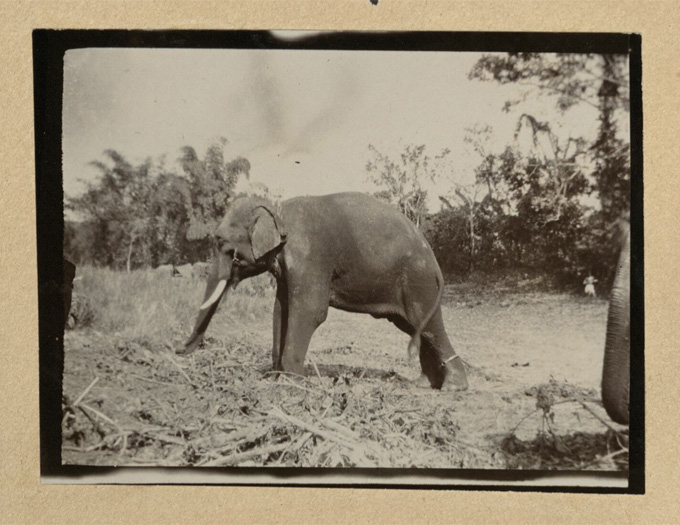 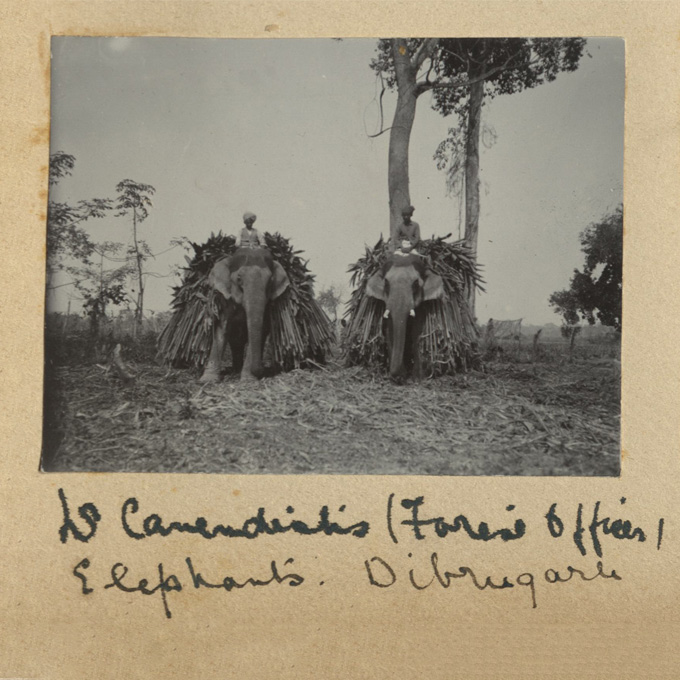 Between September 1907 until April 1913 Hand travelled to India, working as a Sister for Lady Minto’s Indian Nursing Service.

Lady Minto's Nursing Association was established in 1906 in the UK. Its chief objective was to supply trained female nurses and midwives to patients requiring attendance in any part of the Indian Empire.

Hand mentions a few different locations in her album during her time in India. It is likely these were the different places she nursed in.

Map of the British Indian Empire 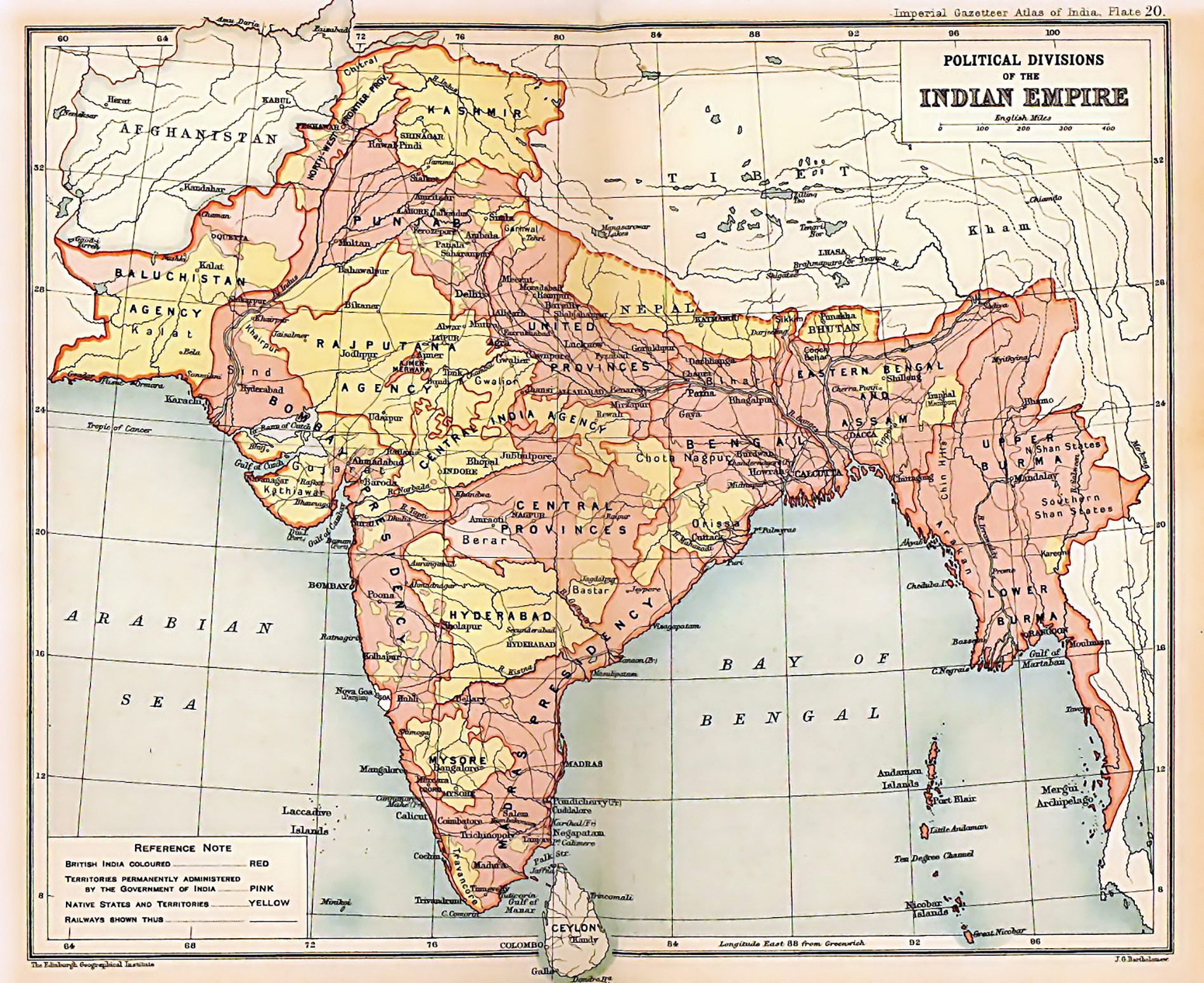 One curious photo from Shillong shows a tent which she marked as her own. Was this her nursing accommodation? More likely this was her home during an excursion into the jungle, a popular pastime for British residents. She seemed to stay in Shillong for a while, and collected a few postcards of the area. A hill station known as ‘Scotland of the East’ Shillong was a retreat for Europeans during the summer months when temperatures elsewhere became too high.

Digboi also features heavily in the album. From the images of the town it is far smaller than Shillong. She was here in 1909 on Christmas Day, where residents played tennis to celebrate. She explored the jungle here too, and went to see the oil wells that made the region rich. However, her album does not indicate whether she nursed in these areas whereas in Silchar and Dibrugarah she takes pictures of the nursing accommodation.

Other experiences in India

Many of Hand's photos are of family scenes and of children. Part of Lady Minto's Nursing Service was to deliver assistance to those in private accommodation, so it is possible she lived with a family to nurse them. Possibly this was the Carstairs, who feature most heavily in the book. Unfortunately, none of these photos have a location or date attached to them. 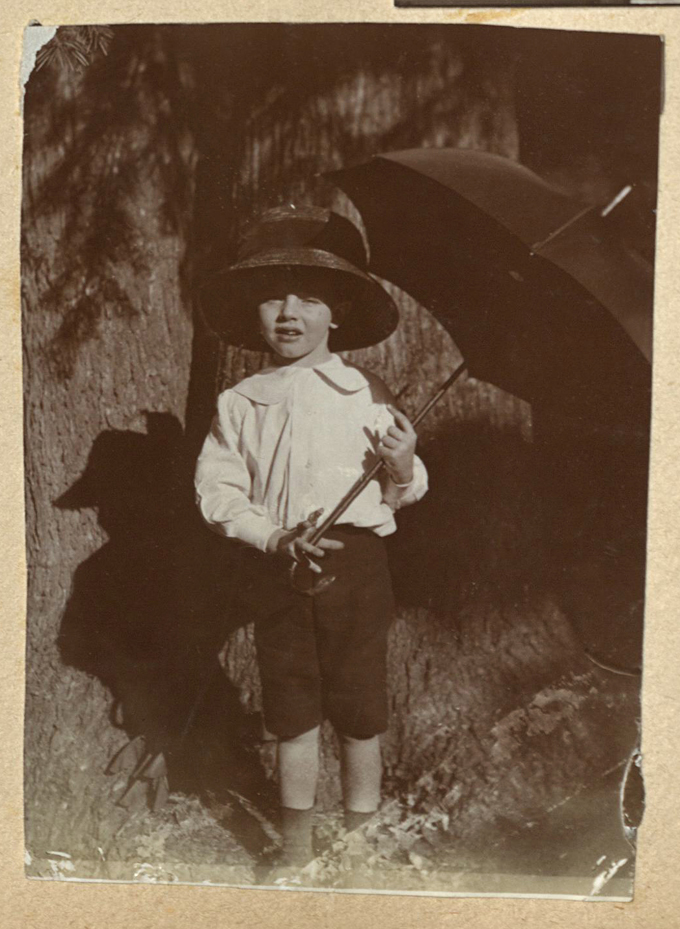 Social occasions feature heavily in Hand's album. Her images of them encapsulate pre-war life in the British Raj. In Shillong she takes a photo of the cricket team. Sporting clubs were a crucial part of life in the Raj, and where Europeans met to socialise. In another photo Hand shows a line of croquet players, right next to an image of 'Mr Brown and his tiger'. Game hunting was a popular sport at this time, but even so a tiger would have been an impressive kill. Certainly Hand thinks so, and takes two photos of it next to a proud Mr Brown. 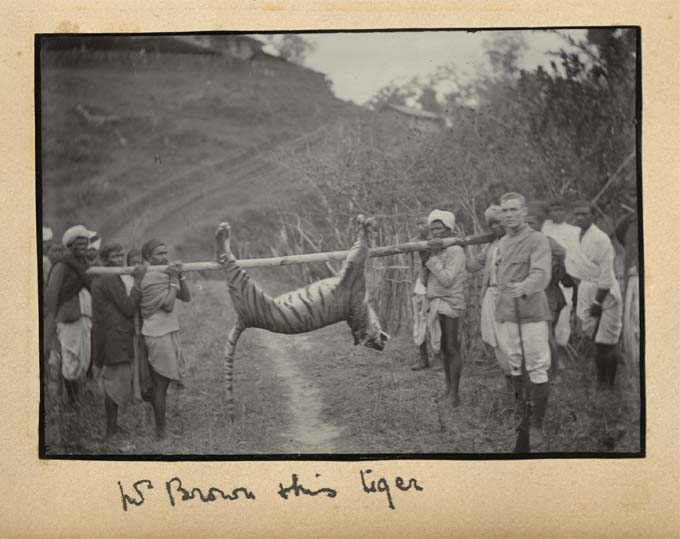 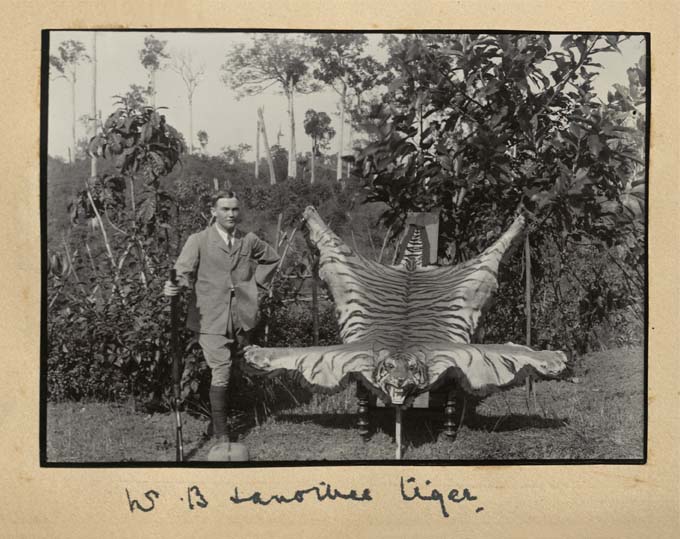 Brockenhurst – a village quite small.
It has a fine church and that's about all

By 1913 Hand had returned to England as she completed a nursing course at Guy’s Hospital in October. It is most likely Hand was nursing at the outbreak of war, but her books show no evidence of it until January 1915. At this time she had started work at the Lady Hardinge Hospital for Wounded Indian Soldiers. This was an enormous hospital complex in the New Forest, set over three houses, and several newly erected tin huts and tents. Over the course of nearly two years it would nurse over 2,000 Indian soldiers.

H. for the huts in which we all dwell
Sometimes its heaven and sometimes its H-
I is for Indians whom we all nurse
Some of 'em bad but might easily be worse 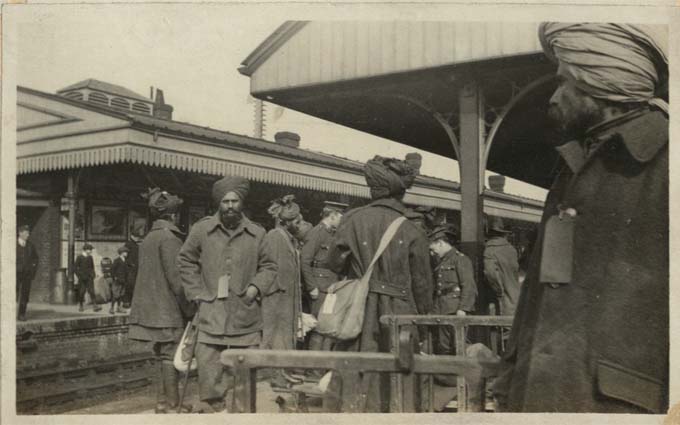 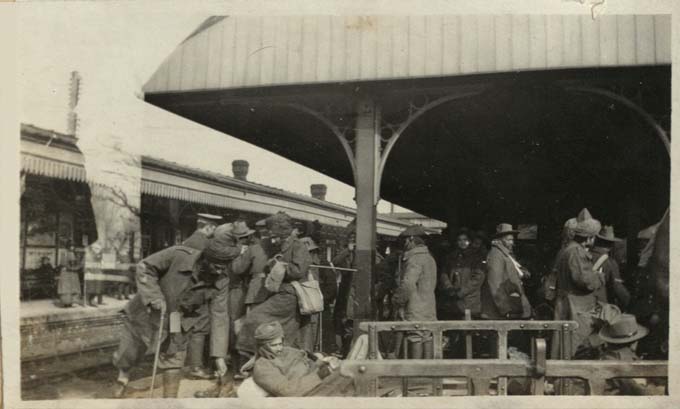 Brockenhurst was chosen as a location for such a large hospital due to its rail connection to Southampton, where most of the wounded arrived from the battlefields and clearing stations. On one occasion Hand took photos of the arriving soldiers, some of whom are on stretchers. You can see here three different uniforms – the British, Indian and Gurkha, distinguishable by their different headgear. The Indian and Gurkha soldiers appear to have labels around their necks, perhaps with their name, regiment, injury or possibly their destination on them. You can see many of them have walking sticks or their arms in slings.

I am alright and tolerably cheerful but am unable to hear from both ears.

Once they arrived at Lady Hardinge's Hospital they would have been housed in the tin huts that are so present throughout the photos. Hand documents life here through a series of candid and posed shots. Many of the photos are outside, suggesting outdoor activity was a part of recovery. In various shots you can see the soldiers playing draughts, praying and what looks like flower arranging – possibly with flowers for the wards.

Hand's photos show that there were not solely British nurses working in Lady Hardinge's, but Indian nurses too. An extract from a poem in her notebook could allude to the difference in skin tone of the nurses.

Food was a big part of the daily routine in Brockenhurst. Officials were careful to observe the different religious practices of the soldiers. They utilised coloured disks on the end of every bed to mark the different dietary needs. You can see one, although its colour is indistinguishable, next to the orderly's hand in this image. Another photo shows the 'cooks Hindu & Mohammedan', implying there was a separate staff and food preparation for the different requirements.

the dinner we get nice and hot
Dear Mrs Cookie I love her a lot
[...] Captain Fox who causes a riot
If by any chance you book a wrong diet

When injured, Indian soldiers were also sent to recover in a temporary hospital set up in Brighton Pavilion. One sepoy [soldier], Iazal Khan, made such a nuisance of himself he was sent to Lady Hardinge's Hospital instead. A member of the Royal Army Medical Corps (RAMC) sends his apologies in the note, which details 'just the opposite to what [Khan] thought it would be.'

The Indian recruits Hand was nursing would have fought in some of the worst battles in France. By early 1916 the Indian forces efforts were being directed elsewhere. From 1916 most Indian soldiers were fighting in the Middle East. Residents of the hospital were moved on to hospitals nearer the Indian front. This is reflected in the letters Hand receives and records in her notebook, many of them writing they are heading to Alexandria.


During her time in India Hand must have learnt Hindustani, which was a requirement for all nurses in the hospital. It's possible that the letters she has recorded in her notebook are her translations of letters written to her in Hindi or Urdu. The letters are also addressed to four other women, who were most likely Hand's colleagues: Sister Howise, Sister Bowers, Sister Browne and Lady Cromie.

With the Indian sepoys gone, Lady Hardinge's became a hospital for New Zealand soldiers instead. Hand's skills in Hindustani were no longer required. Instead she signed up to QAIMNS(R) and started at King George Hospital, London, in June 1916. This had opened in the previous year, and was reportedly the largest military hospital in Britain. 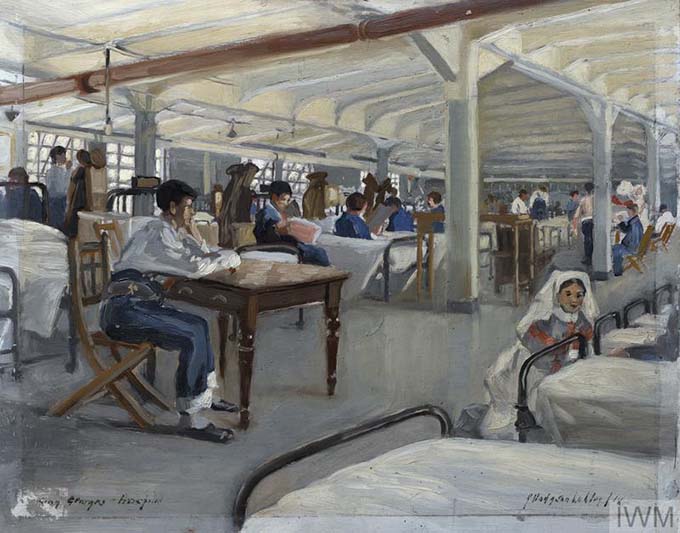 The battle of the Somme (1 July-18 November 1916) had started by the time Hand reached King George's. Hand lost two of her nephews to the battle in the space of five days. Percy Blythe died on the 30 July 1916, aged 21 and Norman Harry Blythe died on the 4 August 1916, aged just 19. Percy had been awarded the Military Cross just three months before for 'conspicuous gallantry'. During an enemy bombardment five men were buried in a dug-out by the explosion of a shell. Lieutenant Blythe collected his party, and, working himself with a pick and shovel, dug them all out and placed them in safety. During 55 minutes, 107 heavy H.E. [Highly Explosive] shells fell close to where he was working.' Hand left no indication in her books how this loss affected her. 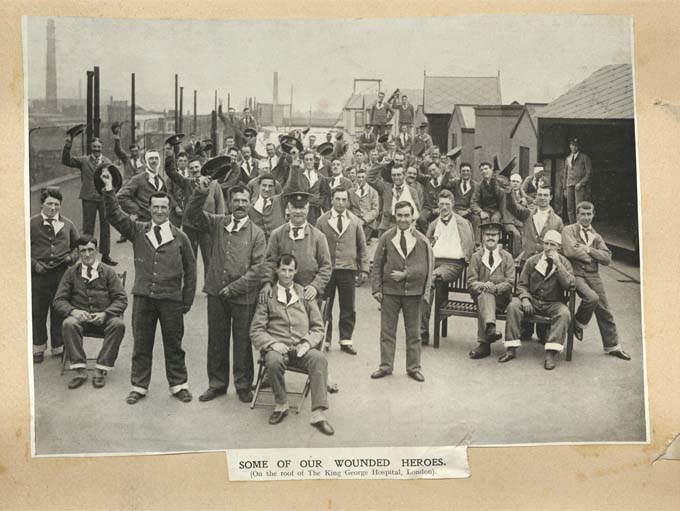 Patients on the roof of The King George Hospital, from Hand's photograph album.

In 1917 Hand was posted abroad to the No. 8 General Hospital in Rouen, France. There is no evidence of her time here in her album. There were heavy wartime restrictions on photography near the front. To have a camera was to invite suspicion, and the possibility of being court-marshalled. It appears that Hand abided by these rules and left her camera behind.

The No. 8 General Hospital was situated just outside Rouen, and was the largest military hospital in the area. Like many of the hospitals it was partly in buildings, and partly in tents. Many of the patients treated in this hospital were not suffering from battle wounds, but from venereal diseases. Rouen had a reputation for prostitution, where it was legal. Many soldiers suffered the consequences, and ended up in No. 8 General, possibly with Hand as their nurse. 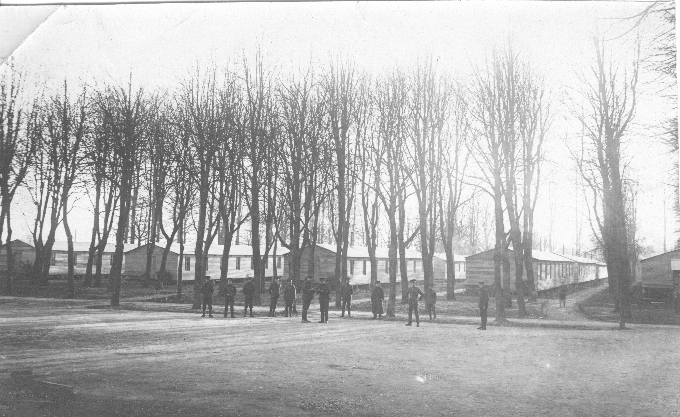 No. 8 General Hospital, Rouen. Courtesy of the RCN archive.

On 24 April 1919, the war was over and Hand was due to demobilise. Instead she disobeyed military orders, failing to turn up for roll call. She had gone to visit her nephew's graves in the battlefields of France.

She has never been too satisfactory and has always had some grievance.

Despite the view of the Matron in Chief, Hand was awarded the QAIMNS(R) medal.

After the war Hand moved to Cheshire. This did not stop her travelling. She went to Indonesia, Australia and France, possibly to see her nephew's graves again.

Hand died on 9 February 1952, at Knutsford and District War Memorial Hospital, Cheshire. She left her money to her niece, Norah, Percy and Norman's surviving sister.