What is industrial action?

What does taking strike action mean?

Taking strike action means not doing any work at all on the day (or part of the day) specified by the union. However, some members may be exempted from participating in industrial action if they are “derogated to work” because their role or service is safety critical. When RCN members went on strike in Northern Ireland (see picture above), those who remained on duty because they were derogated wore badges to indicate that they were nonetheless supportive of the strike.

What does taking action short of a strike mean?

While a strike is a complete stoppage of work, action short of a strike usually affects some aspects of work. It is commonly referred to as “working to rule”, which is a form of action in which employees do no more than the minimum required by the rules of their contract.

First, there must be a trade dispute between workers and their employer. Only then could the RCN conduct a statutory ballot of its members on industrial action.

However, an indicative ballot, that more informally gauges members' appetite for taking industrial action, can happen prior to this point. 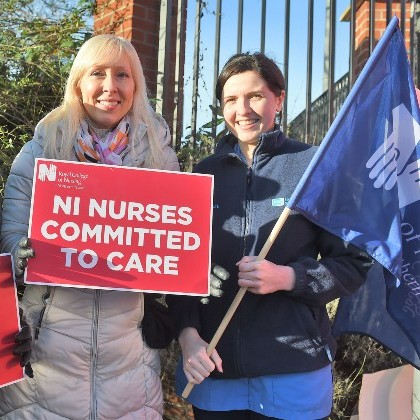 How derogations preserve patient safety during a strike

How many members need to vote to meet the legal threshold?

The Trade Union & Labour Relations (Consolidation) Act 1992 sets out the legal requirements in respect of industrial action in England, Scotland and Wales. It was amended in 2016 to cover turnout, with additional requirements for public services. There is separate legislation in Northern Ireland.

In England, Scotland and Wales, the legislation states that industrial action ballots must attract at least a 50% turnout and the majority must vote yes for action to be lawful. So, if 100 workers are eligible to vote, and only 49 turn out for the vote, workers cannot take industrial action even if all 49 vote in favour.

We need you to have your say. This is why it is crucial that you keep your employer details up to date so we can send ballots to everyone who is eligible to vote. Check your details now at MyRCN.

In England and Scotland, the law also states that for workers whose role involves the delivery of “important public services”, trade unions must meet an additional 40% support threshold among all workers eligible to vote, as well as the 50% turnout threshold, for action to be lawful.

This means that if 100 important public services workers are eligible to vote, at least 50 must turn out and vote, and at least 40 of them must vote in favour. If 50 voted and 39 voted in support, it would still not be lawful to take industrial action, even though the vast majority voted for it.

The law also dictates that trade unions must undertake confidential postal ballots in respect of industrial action and in England, Wales and Scotland, give employers two weeks’ notice of industrial action taking place. In Northern Ireland the notice period is one week.

Ballots in support of industrial action are effective for six months, or nine months with the agreement of the employer, in England, Scotland and Wales. There is no set timeframe on the expiry of an industrial action ballot in Northern Ireland provided action is taken within eight weeks of the result.

What about the NMC code of conduct?

The NMC recognises nurses’ right to participate in lawful industrial action but the code of practice will remain in place during any such action and registrants have a duty to uphold their professional standards at all times.

Want to find out more?

The RCN Industrial Action Handbook is a comprehensive guide. It explains the different types of industrial action members can take and provides examples of how to organise action in the workplace.

From handling disputes to arranging ballots, it sets out the legal requirements the RCN must meet in order to undertake industrial action in various devolved nations.

The handbook covers industrial action from start to finish, outlining how it begins to how it is resolved.

Importantly, the guide includes an overview of how members can safely take part without jeopardising their registration, employment status or the safety of their patients.