Use this guide to find information resources about dementia including books, reports and journal articles.

Carers Trust and Royal College of Nursing (2016) Triangle of care. Carers included: a guide to best practice for dementia care.

James J (2017) Excellent dementia care in hospitals: a guide to supporting people with dementia and their carers. London: Jessica Kingsley.

Mitchell W and Wharton A (2018) Somebody I used to know. Bloomsbury: London.

Rahman, S (2020) Essentials of delirium: everything you really need to know for working in delirium care. London: Jessica Kingsley.

Use these links to see details of books the RCN libraries hold on each topic.

Use these links for details of journal articles on each topic

Journals of interest for dementia. Use these links to see details of availability. 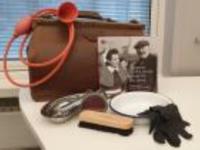 Royal College of Nursing (2017) Case of memories. RCN Foundation: London.
Oxtoby K (2017) Case of Memories: unlocking the past for former nurses with dementia: An RCN project is using replicas of nursing items from the 1940s and 50s to stimulate reminiscence for former nurses and other care home residents. Nursing Standard, 31 (47), pp. 26-27.
House of Memories, National Museums Liverpool

This subject guide relates to:

Editor of this guide