To strike or not to strike? That is the question. Catch up on our member webinar from 25 July 2022

Ballots will be carried out exclusively by post, opening in England and Wales on 15 September 2022. Get ballot ready. Read more in our FAQs.

The Welsh Government has announced that NHS nursing staff in Wales will get a pay increase of at least £1,400 for 2022-23. This will be a consolidated uplift to full-time equivalent salaries, enhanced for the top of Band 6 and all points of Band 7 so it is equal to a 4% uplift. This was what the Pay Review Body (PRB) had recommended. This a real-terms pay cut, given that RPI inflation is currently at 11.7%.

We’ve been campaigning for an NHS pay rise of 5% above inflation, to help address the cost-of-living crisis, encourage people to join and stay in the nursing profession and begin to restore a decade of underpayment.

An emergency session on 22 July of your elected Council voted that members in Wales will be balloted on industrial action.

To have your say, it is important we have the most accurate details on who your employer is, and your contact details. Check these now at MyRCN. 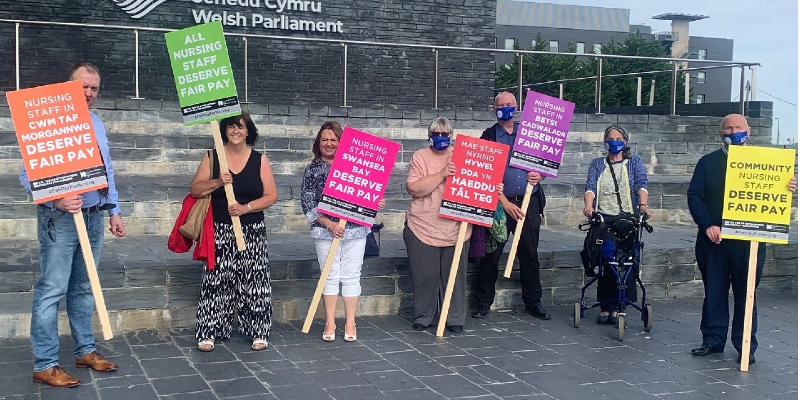 Read our submission to the Pay Review Body

We make the case for a pay uplift 5% above inflation and explore the ongoing impact of the pandemic, the staffing crisis facing the profession and the spiralling cost of living.

The RCN Fair Pay For Nursing campaign is about:

Ultimately, it's about providing safe and effective care for all people of the United Kingdom.

The Fair Pay for Nursing campaign aims to secure significant pay increase for all nursing staff covered by Agenda for Change terms. Nursing deserves a pay rise that is 5% above inflation, as part of a one-year deal fully funded by HM Treasury rather than repurposing existing NHS Wales funds, that applies equally to all NHS nursing staff at all Agenda for Change pay bands.

The Fair Pay for Nursing campaign aims to secure a pay increase that is 5% higher than the cost of living.

Costs have been spiralling at an unaffordable rate and are set to continue rising. For example, inflation – the way we measure how quickly prices are rising – stood at 7.5% in December 2021.

RCN Wales has submitted supplementary evidence to the NHS Pay Review Body for 2022 alongside the RCN's UK-wide evidence.

The Welsh Government’s response will indicate what it believes nursing staff who work outside of the NHS deserve too. We are clear that there must be parity of pay and other terms and conditions for all nursing staff, regardless of employer.

Health is devolved, and funding our health and care system is a political choice. The Welsh Government should make the right choice now.

Don't get left behind! Be the first to hear about ballots, events, and the latest news.

Order and download resources to help spread the word, talk to other members and build support for our campaign.

Parity in the UK

Fair Pay For Nursing is a UK-wide campaign. Get the overview and find out how you can get involved where you are.

View all of our #FairPayForNursing videos and podcasts on the RCN Wales YouTube channel.

Take a look at the most recent news from RCN Wales