Back in the day

As part of the region’s #NHS70 celebrations, we have been talking to former NHS nurses about their memories…

Back in the day

As part of the region’s #NHS70 celebrations, we have been talking to former NHS nurses about their memories… 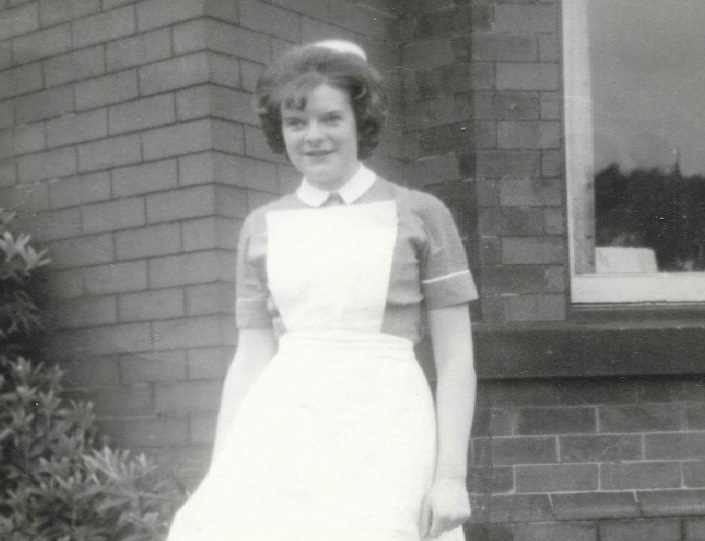 Anne Edwards trained to be a nurse at Pendlebury (Royal Manchester) Children’s Hospital from 1963- 1966. She described how only single nurses were permitted to work there and if a nurse was to marry, she was asked to leave. Now of course, that wouldn’t be allowed as people from all walks of life can train to join the nursing profession.

Anne described how challenging the process was as student nurses had to do everything they were told. Students attended the Preliminary Training School for three months before applying their learning and developing their skills on the ward.

Anne said: “You carried around your workbook everywhere with you and I still have it to this day. When you had completed a certain amount of work, you were allowed to change the colours of your belt and that was how people recognised what stage of your training you were at.”

Anne qualified in 1966 but as she married her doctor husband David in August, she left Pendlebury and went to work at Withington Hospital, in Manchester, on what was known as the Special Care Baby Unit (SCBU) – now referred to as Neonatal Intensive Care Unit (NICU).

She said: “It was quite a shock moving to Withington as it was such a huge hospital and when you walked to the Pathology Labs, you had to wear your cloak as it was a 15-minute walk.”
Anne and David then moved to North Ormesby, just outside Middleborough and she went to work in SCBU again. However, Anne said: “I only lasted a day as in the afternoon I had a sore throat so I asked for a mask as it the slightest sign of anything in my former roles you had to wear a mask but I was told you don’t need to bother which was against everything I knew so I didn’t go back!’

During this break, Anne and David started a family, so they returned to the North West in the 1970s where Anne worked in Warrington and was once again drawn to SCBU saying “I just loved babies”. Although there was a shortage of nurses, Anne could only work part time because of her own family commitments. However, she was then given the choice whether to apply for a sister post or leave as they needed full time staff, so she left.

Anne worked in a community nursing role as although she had a paediatric nursing qualification she was told: “If you can give an injection to a baby, you can give it to anyone!” However, after the challenges of SCBU, she found community nursing just wasn’t enough and took the decision to try other roles outside the NHS. Following a car crash she became a school/clinic nurse for about a year.

She said: “I always found I got the position I wanted every time because I had that nursing background. It helped me go everywhere. I ended up working in a school for children with learning disabilities and I got that job because I was a nurse. I was in my element.”

However, the lure of nursing became too much for Anne and she did a return to nursing course at Whiston Hospital in the nineties with the aim of returning to their profession. She focused on medicine and surgery for paediatrics and although in her words ‘hated medicine’, she loved surgery and was thrilled to be offered a surgical post.
Anne said: “In the end, I turned it down as I loved working at the school so much. The course was great, and very helpful and worthwhile but I went back to the children at the school.”

Eventually Anne finished working at the school due to ill health but trained as counsellor in a GP practice.  She now volunteers  in bereavement support. She believes it is more difficult to work as a NHS nurses now as nurses who come to them for training are working 12 hours shifts and are just exhausted.

She added: “The demands on their time are ever increasing and there is just so much paperwork which I actually realised when I went to Whiston. I worked in the NHS for about seven years in total and I never regretted as it was just brilliant. I just enjoyed the job and felt like I learned so much. I worked my way up and it was very good for your memory!

“We had to face the sister with our back to the ward, say each child’s name, their medical condition and where we were up to with their treatment without turning round to look at the children. You soon got a good memory!”

However there were dark moments as Anne said that watching children die was the most challenging part of her job.

Changes to the NHS and nursing profession were happening as Anne was finishing her time in the NHS.

She said: “The degree nurses were just coming in and that was a bit of an eye opener! I think they came in and thought they knew it all. They knew all the technical bits, but putting it into practice was another thing. They would leave the tops of the incubators open, they did not realise the importance and it was almost like  having a junior with you.

“I do think things have changed in both the NHS and nursing profession. I always wanted to be a nurse. It was a vocation otherwise you never would have stuck with it. Now it seems not to be a vocation, but a job.”