With the newly-published interim NHS People Plan promising to prioritise the health and wellbeing of NHS staff and promote compassion in how they are managed, a health trust in the West Midlands has already shown how it is realising this vision. 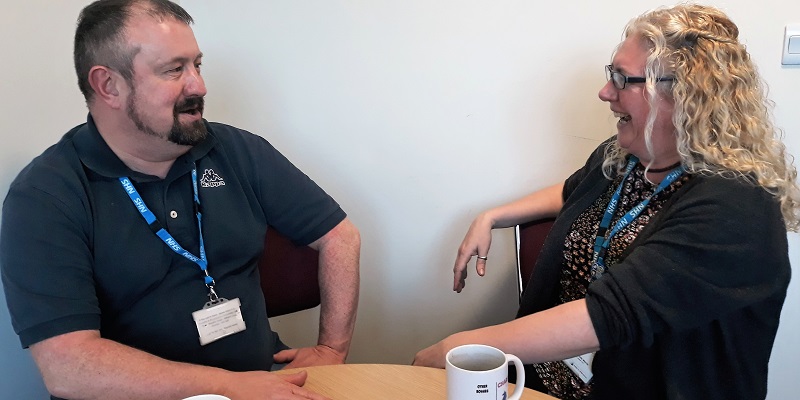 “You see the word ‘dismissal’ in all of the documents. You reach the Stage 3 hearing and you know the possibility is real.”

Dave Bailey recalls his most pessimistic thoughts leading up to the meeting which would decide whether his unavoidable time off work due to sickness would mean losing his job as an experienced mental health nurse on the grounds of ill health.

Dave, an RCN member, had no inkling that the worsening pains in his abdomen and back that left him in too much discomfort to work were related to his Crohn’s disease, for which he was treated in 2002. After all, he’d had no symptoms for more than a decade.

But in the space of two years, things, in Dave’s own words, “spiralled out of control”.

“I was admitted to hospital, re-diagnosed and facing infusions of medicine for the rest of my life, I had cellulitis in my head and was off work for five or six weeks and, on top of everything else, my brother died,” he said. “Things weren’t easy at work either because I was doing three different roles.”

As Dave’s manager in Coventry’s Early Intervention in Psychosis Team, Charlie Marchi has a responsibility to support Dave and other staff who’ve had time off sick whilst ensuring the team continues to deliver the vital service it provides to people at risk of becoming seriously ill themselves.

Charlie said: “When someone triggers the final stage of the sickness absence management policy, you have to balance what’s fair for them with what’s right for the needs of the service and our clients.

“For me, it was about being open, sitting down and talking, encouraging Dave to involve his union representative, not simply writing letters at each stage of the process. It became clear from the pattern of his absences that they were related to an underlying illness.”

Even so, Charlie added, the decision about Dave’s future employment was not hers to make. It would be for an independent senior manager from within Coventry and Warwickshire Partnership NHS Trust to adjudicate.

“I can make recommendations,” said Charlie, “but at no point could I say to Dave not to worry about the outcome.”

In the event, any anxiety Dave had upon going into the meeting was eased at the very start when the manager chairing the hearing said the trust was not seeking to dismiss him.

Dave said: “I wasn’t expecting that, and it came as a relief. The trust has been very, very helpful to me in terms of giving me time off for medical appointments and treatment, adjusting my caseload to keep it manageable and supporting my professional development.

“I love my job. I wouldn’t have stayed in Early Intervention for 10 years if I wasn’t passionate about it. I think the feeling of doing good benefits my emotional health.”

Charlie added: “Dave is a good worker, he knows his stuff and, in fact, the whole team benefits from his knowledge and experience. These are the circumstances I needed to take account of.”

For Phil Noyes, the RCN’s lead steward at the trust, who supported Dave through the sickness absence process, the way the organisation and Charlie managed Dave’s case is exemplary.

He said: “I was deeply impressed by the approach that both Dave and Charlie had to Dave’s long-term health condition.

“The understanding that Charlie had for Dave’s challenges and her appreciation of him as a pivotal part of the Early Intervention team was very evident, and it was matched by Dave’s determination to handle his condition and be fit for work in all but the most debilitating situations.

“Although I’d advised Dave that dismissal was unlikely, I was heartened that any doubt was removed at the very start of the final stage hearing.

“If there is a model for conducting a fair process and reaching the right outcome, this was it.”