Alongside the monthly news digest, this issue includes features on:

Write to the editorial team:

To advertise in RCN Bulletin email:

RCN Bulletin 325: March 2015
View: e - Brochure
In this issue Chair of RCN Congress Stuart McKenzie looks forward to Congress 2015 and Dr Peter Carter announces that he is stepping down after eight years as Chief Executive and General Secretary. 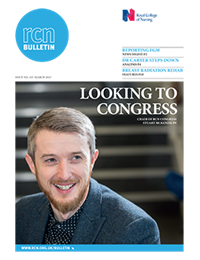